After many years of campaigning and protesting in cities around the world, particularly in Europe, there is now a much more open-minded culture and tolerance of the LGBT collective. As well as this, sexuality is being normalized and people now have more freedom. As a result of this, LGBT+ tourism has increased in many European cities and Pride month is celebrated in more than 20 countries in Europe. Are you looking for the best Europe’s LGBT friendly destinations? Join one of our tours around Europe and experience several of them in summer with Unitrips.

Despite the fact that these changes in attitudes towards sexuality have been reflected in tourism, sadly, there are still many places in the world where homosexuality is punishable with fines, prison sentences and in the most extreme cases, the death penalty. Thankfully, however, the majority of countries accept and protect gay people’s security within the law. It is because of this that is so important for the LGBT+ collective to know which destinations will accept them without the need to hide themselves, and which places they would have a harder time in. Fortunately, Western Europe is open to the LGBT+ community, and is full of the most interesting offers. Within the top 10 picks, are the following:

Soho was the first gay district in Europe, and is without a doubt, the liveliest part of the city. Much like the Chueca district of Madrid, it used to be a zone for prostitution and had a pretty bad reputation.

The sex shops were the kings of the streets, but an ambitious plan for regeneration has given the area back to the tourists. In terms of fun places, London is considered to offer the most complete package. In terms of bars, the most highly recommended are: The Yard, Friendly Society, G.A.Y and She Soho. During the day the theatres, shops and cafes with all that London je ne sais quoi are not to be missed.

For night time, Heaven, Ku or the legendary Ministry of Sound attract a large number of people. As well as this, other “ambient” spots have emerged, such as Brixton (more ‘rough around the edges’ than Soho) just south of the Thames, or King’s Cross in the North of the city. Clubs like Wolf or Crash form part of this other alternative.

Pride is celebrated in London every year with a huge parade through the streets, as well as hundreds of ecents showcasing LGBT+ culture.

In 1998 Denmark made history when it became the first country in the world to recognise same-sex unions, and in the heart of Denmark lies its compact and cobble-stoned capital, with a tranquil beauty.

In Copenhagen, you can find one of the oldest openly gay bars in Europe, The Centralhjornet which dates back to the 1950’s, as well as the modern district of Vesterbro also home to the Red Light District of the city. It is one of the most tolerant and open communities in Europe, with a functional yet avante-guarde air, an enormous variety of gay-friendly bars and hotels oozing with charm. The most northerly capital in the world is considered among one of the most open and inclusive cities. In 2006, same-sex partners acquired the same rights as heterosexuals in all regards. What’s more, it is one of the most interesting destinations in Europe, where you can walk behind waterfalls, descend into dormant volcanoes or spend the day in one of the many geothermal lagoons. One of our favorites Europe’s LGBT friendly destinations.

The Nordic countries continue to surprise us with their enormous variety and gay inclusivity. Tolerance is a well-developed trait of the Finnish, and it is worth mentioning that they love receiving tourists. Helsinki has a lot to offer and it is there where, for example, you can find the biggest gay nightclub in the Nordic countries: Don’t Tell Mama.

What’s more, you can experience the Nordic Gay Pride in all its splendour during a week full of events that culminates in the day of the main parade, filling the whole of the city with bright lights and tens of thousands of attendees. Want to visit Finland? Talking of Gay Pride, Brussels is host to one of the most noteworthy. Its processions are led all up and down the slopes and narrow alleys of the whole city. People from all over Belgium attend the festival as it is considered among the best in Europe. And that’s not to mention the array of daily activities on offer to the LGBT community. At their disposal is a district, known as “the gay district of Brussels”: Saint-Jaques, which is very central and located next to the famous Manneken Pis. Its most ‘gay’ street is Marché Au Charbon, full of bars and little corners particularly aimed at the LGBT community. 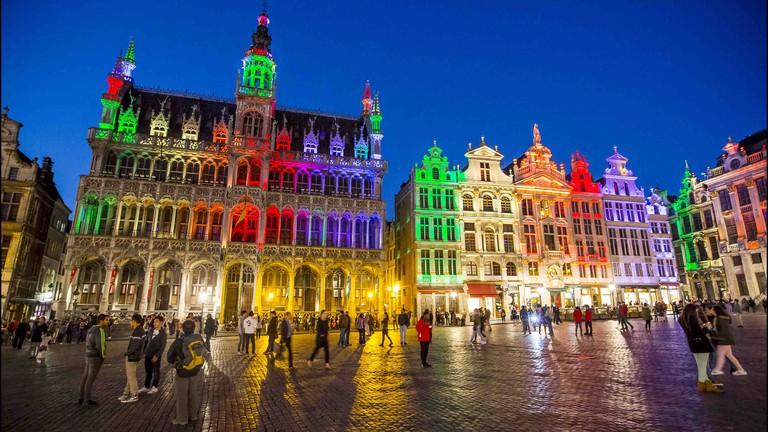 Holland is the pioneer in LGBT+ rights, and it was the first country to legalise gay marriage in 2001. The centre of the most tolerant city in the world boasts more than 100 establishments aimed at the LGBT public, including bars, restaurants, cafes, clubs, hotels, saunas and libraries. In Reguliersdwarsstraat there are legendary bars, such as the Havana – a spacious bar with an industrial look spanning 2 floors that was recently reopened, where you can have a coffee in the afternoon and even have a drink and a dance at night. On the same street, you can also find at n° 37 the Ludwing II, one of the most famous gay establishments in Amsterdam which has also just reopened its doors and where you can eat in its cafeteria, or enjoy the best music in a space that recreates an exclusive 19th century Paris nightclub. Definitely one of the most popular Europe’s LGBT friendly destinations

Amsterdam has one of the most unique Pride events in the world – it takes place on the water! Thousands of people get on board the boats and cruise down the canals of the city. Why not visit Amsterdam during Pride month.

Berlin is a city which is totally tolerant of the LGBT+ community, the cradle of avant-guarde movements, it offers as one of its attractions the Schwules Museum, which is dedicated to exhibiting homosexual history, art and culture. With many gay clubs, restaruants and hotels, Berlin really does raise the bar for all other European cities.

The Christopher Street Day in Berlin (the day of gay pride) takes place throughout the city and is the most well-known and crowded marches in Europe. It ends with a huge party under the Victory Column. It is usually celebrated at the end of June. The festival is also celebrated in other cities like Hamburg, Cologne and Zurich. Berlin is one of the most important Europe’s LGBT friendly destinations.

The Parisian gay district par excellence is Le Marais, though there are also other less famous ones all over the city. Le Marais became a gay-friendly zone in the 1980s, when artists and bohemians started to settle down in the district converting it into one of the most chic spots in Paris, with houses usually reaching astronomical prices. One of the best gay clubs to visit is Scream. As well as this, there are lots of lgbt+ bars and pubs.

The Eiffel Tower that is illuminated in memory of the victims of the gay nightclub mass shooting in Orlando, in Paris, France, June 13, 2016. REUTERS/Gonzalo Fuentes

The liveliest island in Greece has traditionally been one of the best-valued destinations by gay tourists. Mykonos has so many cultural and leisure possibilities that it makes it impossible not to take advantage of its tourist offers, regardless of whether you are looking to go out and party hard or not. Given its size, even a weekend spent there will give you some idea of the charms that this small island has to offer, and the fact that it’s very well-connected makes it a key destination to visit over the summer holidays. One of the most fun Europe’s LGBT friendly destinations. 1. IBIZA, SPAIN (and all of the peninsula)

This year, Ibiza participated with a specific slot in FITUR Gay (LGBT) 2016, where the second edition of Gay Pride was launched, an event seeking to strengthen and recover LGBT+ tourism to the island. There are many gay bars and clubs that host LGBT events in Ibiza, including Club HEART and Lola´s.

In addition to Ibiza, Spain in general hosts an amazing gay scene, with Madrid being the gay capital of the peninsular. The Madrid Pride takes place every year in June/July and it is known as one of the largest gay pride parades in Europe. In adittion to this, there is an anual festival calle the WE Pride Festival that takes place for 5 days in July. This is our favorite Europe’s LGBT friendly destinations.